Get to Know The Alpaca Yarn Company 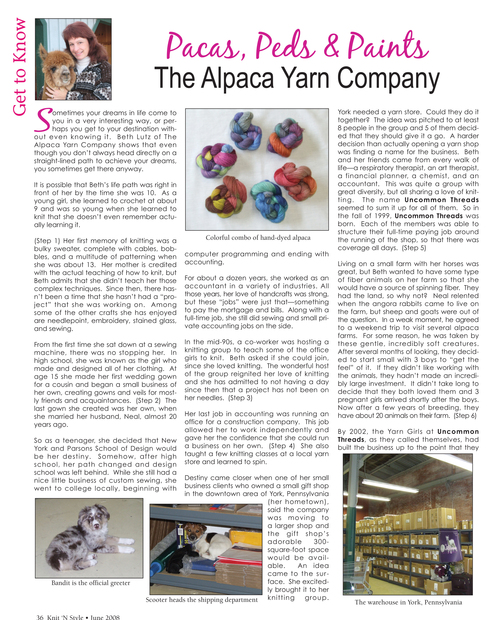 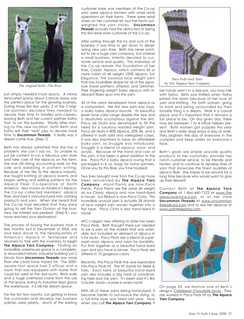 This article was from a 2008 interview done with Knit in Style Magazine. It was a profile of my company. The photos were the actual layout in the magazine.

Sometimes your dreams in life come to you in a very interesting way, or perhaps you get to your destination without even knowing it. Beth Lutz of The Alpaca Yarn Company shows that even though you don’t always directly go in a path to achieve your dreams, you sometimes get there anyway.

It is possible that Beth’s life path was right in front of her by the time she was 10. As a young girl, she learned to crochet at about 9 and was so young when she learned to knit that she doesn’t even remember actually learning it. (Step 1) Her first memory of knitting was a bulky sweater, complete with cables, bobbles and a multitude of patterning when she was about 13. Her mother is credited with the actual teaching, but she admits that she didn’t teach her those skills. Since then, there hasn’t been a time that she hasn’t had a “project” that she was working on. Among some of the other crafts she has enjoyed are needlepoint, embroidery, stained glass and sewing. From the first time she sat down at a sewing machine, there was no stopping her. In high school, she was known as the girl that made and designed all of her clothing. At age 15 she made her first wedding gown for a cousin and began a small business of her own, creating gowns and veils for mostly friends and acquaintances. (Step 2) The last gown she created was her own, when she married her husband Neal almost 20 years ago.

So as a teenager, she decided that New York and Parsons School of Design would be her destiny. Somehow, after high school, her path changed and design school was left behind. While she still had a nice little business of custom sewing, she went to college locally beginning with computer programming and ending with accounting.

For about a dozen years, she worked as an accountant in a variety of industries. All those years, her love of handcrafts was strong, but these “jobs” were just that – something to go to to pay the mortgage and bills. Along with a full time job, she still did sewing and small private accounting jobs on the side.

In the mid 90’s, A co-worker was hosting a knitting group to teach some of the office girls to knit. Beth asked if she could join since she loved knitting. The wonderful host of the group re-ignited her love of knitting and she has admitted to not having a day since then that a project has not been on her needles. (Step 3)

Her last job in accounting was running an office for a construction company. This job allowed her to work independently and gave her the confidence that she could run a business on her own. (Step 4) She also taught a few knitting classes at a local yarn store and learned to spin.

Destiny came closer when one of her small business clients who owned a small gift shop in the downtown area of York PA, her hometown, said they were moving to a larger shop and their adorable 300 square foot space would be available, an idea came to the surface. She excitedly brought it to her knitting group – York needed a Yarn Store – could they do it together? The idea was pitched to at least 8 people in the group and 5 of them decided that they should give it a go. A harder decision than actually opening a yarn shop was what to call it. Beth and her friends came from every walk of life – a respiratory therapist, an art therapist, a financial planner, a chemist and an accountant. Quite a group, very diverse, but all sharing a love of knitting. The name Uncommon Threads seemed to sum it up for all of them. So in the fall of 1999, Uncommon Threads was born. Each of the members was able to structure their full time paying job around the running of the shop, so that there was coverage all days. (Step 5)

Living on a small farm with her horses was great, but Beth wanted to have some type of fiber animals on her farm so that she would have a source of spinning fiber. They had the land, so why not? Neal relented when the angora rabbits came to live on the farm, but sheep and goats were out of the question. In a weak moment, he agreed to a weekend trip to visit several alpaca farms. For some reason, he was taken by these gentle, incredibly soft creatures. After several months of looking, they decided to start small with 3 boys to “get the feel” of it. If they didn’t like working with the animals, they hadn’t made an incredibly large investment. It didn’t take long to decide that they both loved them and 3 pregnant girls arrived shortly after the boys. Now after a few years of breeding, they have about 20 animals on their farm. (Step 6)

By 2002, the Yarn Girls at Uncommon Threads, as they called themselves, had built the business up to the point that they just simply needed more space. A newly renovated space about 3 blocks away was the perfect place for the growing business. During those first few years, 3 of the 5 original partners decided they needed to devote their time to families and careers leaving Beth and her current partner Kathy Yost to run the business. Shortly after moving to the new location, both Beth & Kathy left their “real” jobs to devote more time to Uncommon Threads. It really was a dream come true. (Step 7)

Beth has always admitted that she has a problem; she can’t say no. So unable to just be content to run a fabulous yarn store and take care of the alpacas on the farm, she was still doing accounting work on the side & dabbling in pattern writing. Because of her ties to the Alpaca industry, she taught knitting at alpaca events and began writing and editing patterns for the Alpaca Fiber Co-operative of North America. Also known as America’s Alpaca, the Co-op collected member’s alpaca fiber and had it manufactured into clothing products and yarn. So when she heard that the Co-op had decided that they were going to sell the Yarn Division of the business, her interest was peaked. (Step 8 – you have reached your destination)

The process of buying the business took a few months, but in December of 2004, she and Neal drove to the headquarters of America’s Alpaca in Tennessee and returned to York with the inventory to begin The Alpaca Yarn Company. Finding an incredible warehouse space in a completely renovated historic industrial building just 2 blocks from Uncommon Threads was more than she could have hoped for. The 2000 square foot space had 2 offices and a room that was equipped with water that could be the fitted into a dye room. Brick walls and a huge overhead crane from it’s industrial days grace the warehouse. It is still her dream space.

For the first few months, just getting to know the customers and develop her business policies were priority. Much of the existing customer base were members of the co-op, alpaca farmers with small retail operations on their farms. There were retail stores on her customer list, but the farms out-weighed the yarn stores. Uncommon Threads actually had the distinction of being the first retail store customer of the co-op.

All of the yarns developed have alpaca as a component. Her first new yarn was Joya, a bulky baby alpaca boucle. It’s beautiful jewel tone color range dazzles the eye and is absolutely scrumptious against the skin.

Paca de Seda was developed to fill the need for a luxurious worsted weight yarn. Paca de Seda is 80% alpaca, 20% silk and is offered in both solid and variegated colors.

It was also important to have an affordable bulky yarn, so Snuggle was introduced. Snuggle is a blend of Alpaca, wool and acrylic. Because of the hand and cost of this yarn, it has been a great addition to the line.

Paca Puf is baby alpaca roving that is packaged in 8 oz bags for hand spinners. Once you try this fiber, you’ll be hooked!

Two lines brought over from the co-op have been re-invented by The Alpaca Yarn Company. Hand Paints are now Paca Paints. Paca Paints are the same dk weight as our Classic Alpaca and now hand dyed in house. Suri Ribbon is now Paca Cinta. This incredibly unusual yarn is actually 28 strands of lace weight yarn woven together into a flat tape. Paca Cinta is also hand dyed in house.

Our largest new offering to date has been Paca Peds. Beth thought there just needed to be a yarn on the market that was washable, but included an element of alpaca in it for socks. Paca Peds are a blend of super-wash wool, alpaca and nylon for durability. Put that together as a beautiful hand dyed yarn and you have a winner. Paca Peds are offered in 10 gorgeous colors.

Recently, the Paca Peds line was expanded into Paca Peds HT. The HT stands for Heels & Toes. Each hank of beautiful hand-dyed yarn also includes a 25 g hank of coordinating heel and toe yarn. It’s been said it’s like Cracker Jacks – a prize in every hank!

With all of these yarns being hand dyed, it became harder to out-source the dying, so a full time dyer was hired last year. Now when you call The Alpaca Yarn Company, if her hands aren’t in a dye-pot, you may talk with Tasha. Beth was thrilled when Tasha joined the team because of her love of yarn and knitting. For both women, going to work to be surrounded by their favorite thing is a dream. Work is a casual place and it’s important that it remains a fun place to be. On any given day, there may be between 1 to 4 office helpers present. Both women got puppies this year & Beth’s older dogs enjoy a day at work. They brighten the day of every one in the complex and keep smiles on the girls faces.

Beth’s goals are simple. To provide quality products to her customers, provide top notch customer service, to be friendly and honest and to continue to develop lines of yarn that showcase the finest qualities of alpaca. She hopes to be around for a long time because who would want to give up their dream? 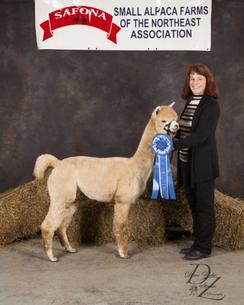 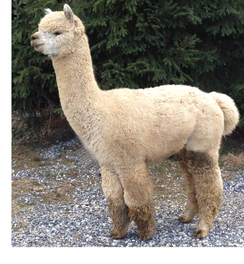 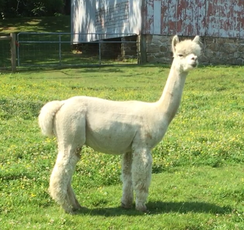 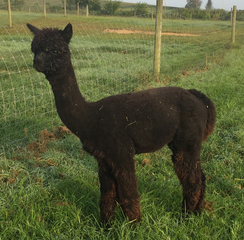